I finished my first sock yesterday! 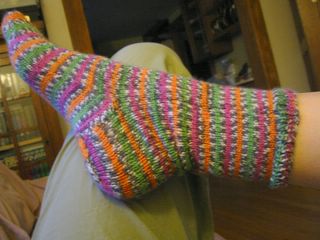 Ta da!
I had to unravel the heel turn to fix the mess I made with the short rows, but once I did and paid a little more attention to what I was doing, the rest was fast and fun. I think I'm going to get hooked on sock knitting, partly because they are so compact and easy to pick up and shove in my backpack on my way out the door. With the Magic Loop technique, there is no worry about the stitches slipping off the needles and the patterns are so basic that most of the time there isn't any need to have it with you.

I don't think I'll become one of those people who only knits socks though. I like sweaters too much for that. But this gives me an excuse to always have a pair going. I'm already anticipating my next sock yarn purchase--Knitpicks has three types of sock yarn at incredibly reasonable prices: Simple Stripes, Sock Garden, and Sock Landscape, all of which have appealing colors.

On the other E-Z front, I present last night's dinner: 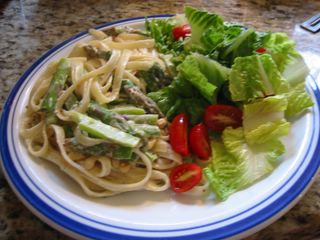 A little out of focus, but you get the idea...

The pasta is a recipe from Everyday Food--one of the few food magazines that I don't subscribe to, but this dish might make me change my mind. The "sauce" if you can even call it that, was assembled in the time it took to cook the pasta and contained:
asparagus, whole-grain mustard, toasted pine nuts, and goat cheese. It was also supposed to have dill in it but I substituted a handful of fresh chives and a little parsley. It didn't call for any olive oil, but I drizzled some over the finished pasta because I love olive oil and could drink it straight from the bottle (which sounds gross, but I'm serious). Without the olive oil the pasta might have been a little gluey, but with the addition, it was a terrific, fast, creamy pasta dish.

I subscribed to Everyday Food when it first came out and there are a few things about the magazine that annoy me. I hate digging through the incredibly crappy advertising (Kraft et al) trying to find the recipes and I find that each issue has some sort of "idiot" article--like 6 pages devoted to how to boil an egg or steam broccoli--that make me wonder who they think their readership is. Most people who read cooking magazines, even ones devoted to speed and simple preparation, know how to steam broccoli.

I might be able to forgive these flaws if they continue to print enough good recipes like the one I made last night. After all, I routinely forgive Cook's Illustrated for the editor and founder's hokey essays at the beginning of each issue. I know I should feel indebted to Chris Kimball for founding a magazine that has provided many of the recipes in my food repertoire, but there is something about they guy that just makes my skin crawl, maybe it's the bow tie, maybe it's the smug folksiness of his essays. I have never caught an episode of his cooking show America's Test Kitchen which is a good thing because I'd probably throw my cast iron skillet (perfectly seasoned thanks to the fine instructions in Cook's Illustrated) at the TV.
Posted by Kate at 7:25 AM

Glad you were able to sort out the short rows. The sox look great! :)

Okay, I need to learn to knit. Those are fabulous socks! Congratulations on learning a new skill!

Oh, Kimball is a pain in the patootie on the show! They usually do a review of a food (the one I remember is comparing canned/bottled cherries), and he always, but *always,* likes the one all the other reviewers disliked the most.
The sock looks great!

You crack me up with your concise description of Everyday Food. I have borrowed a couple of my friend Nancy's copies and found a few recipes worth making but overall I agree - the few recipes don't feel worth the amount of junk in each issue. Plus there are simply such better foodie mags out there!

So I'm curious, since you say you're an olive oil lover...do you have a favorite brand or type of olive oil? I know there is a vast difference between certain types but don't truly know much about it. Would love to hear your thoughts!

Everyday Food has suffered from Martha's absence. Hopefully it'll get better now that she's out of the slammer.

Hey Sue--
I'm trying to remember the most amazing bottle of olive oil I had recently--I really did just make plain pasta and drench it in oil and black pepper. Sarah gave me a bottle of it as a gift and unfortunately when I finished it, Brian recycled the bottle, so I can't remember the name. I'm pretty sure she got it at Big 10 so next time I go, I'll try to remember to get some and pass on the name.