The culinary discovery of the weekend was this: 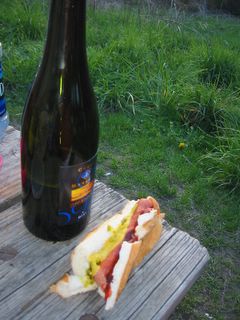 A nice bottle of prosecco is pretty good with a hotdog.

We went camping out at Crooked Lake on Saturday night. The weather was beautiful and more importantly it was a clear night which meant that my husband and his best friend, Brian (yup, two Brians and they are both engineers) got to unpack their latest toys and actually use them: 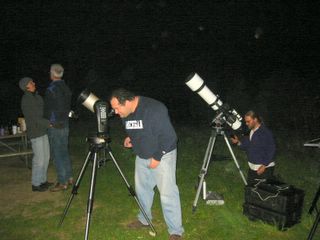 We saw the stripes of Jupiter and 4 of Jupiter's moons. I include myself because I glimpsed them for about 30 seconds before dashing off to keep Fiona out of a) the fire and b) the large bag of smore fixings. Our friends Ami and John came (and brought the prosecco!) and my kids were all over Ami and also Sarah and her son Nicholaus (thus getting in the way of Sarah's ability to knit her second sock.) I managed to summon the willpower to leave my current sock at home and once my kids were covered with melted marshmallow and dirt, I was pretty glad I made that choice.
On Sunday, my Mother's Day treat was to ditch the kids with Granny Kathy (we had a picnic in the park with outrageously priced sandwiches from Zingerman's with her earlier in the day) and go to see Hitchhiker's Guide to the Galaxy. Normally this news wouldn't make my blog except for the fact that paying for two adults to go to a full-priced first-run film now costs $18.50 in Ann Arbor and of course I converted that into how much yarn it would buy (about 4.5 balls of the sock yarn I am coveting at Knitpicks). But the film actually featured knitting! At once point they hit the improbability drive and all the characters turn into little knit models of themselves: 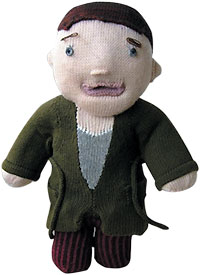 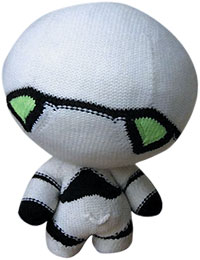 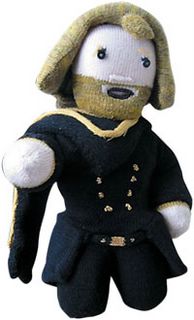 Zaphod Beeblebrox
While a yarn-man, Arthur is sick and spews a beautiful multi-colored yarn. I don't think there were any other knitters in the audience because I was the only one squealing and pointing at the screen. But the filmmakers must know there are enough Douglas Adams-reading knitters out there because you can actually buy the knitted models of the characters; if anyone locates a pattern for the dolls, let me know.

My how your husband has shrunk, or Pink has grown, or . . . something! I'm amazed no one has commented on the telescope picture.

heh heh--to tell you the truth I never noticed that Brian looked like a Munchkin in the photo till you pointed it out! I think he was making sure the eye piece was low enough that Ian could look through it; he knows that I will let him spend any amount of money on his hobbies if it also involves the kids, so Ian is now being recruited into stargazing. Since the kid is naturally a night-owl, he'll probably take to it.