Here is a meme I stumbled across while perusing Chubby Hubby's blog. First, a photo of my cookbook shelf: 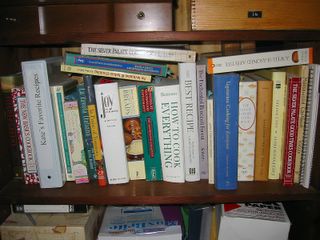 and now the cookbook-centric questions:
1. Rationale behind what we're seeing?
Most people who know me will be surprised by how few cookbooks are in the above photo. There are a few reasons behind this:
1) We are still building the room that will become my office and which will have plenty of shelf space. A number of less-used cookbooks are currently in bins in the basement awaiting their release (hopefully sometime later this summer).
2) The internet has really changed how I cook. More often than not, I go to my computer to find a recipe I want rather than prowling the indexes of numerous cookbooks.

2. Most recommended?
Has to be Mark Bittman's How to Cook Everything.

3. Cookbook that made you what you were?
I have to give credit to cooking magazines--I remember my parents subscription to Sphere magazine (no longer in print) and cooking a Greek meal from it when I was 14. In retrospect it was a pretty wacky meal with everything except the salad wrapped in filo dough (filo cheese triangles to start, some sort of chicken in filo for main course, and a filo semolina pudding for desert).

4. Porniest cookbook?
Again, I defer to the many food magazines to which I subscribe. I think Saveur is the porniest--any magazine that publishes a recipe for Bacon Tempura (with a lovely photo no less) is pretty wacked out in the real-world recipe application. I don't think I've ever made a recipe from an issue of Saveur, but I sure do love drooling over each issue.

5. Sophie's Choice cookbook?
(For those of you who haven't read Styron's novel--or seen the equally wrenching film--this means what book would you choose over all the others to save, assuming that someone was planning to torch the rest of your books.) If it had to be a published book, it would be How to Cook Everything, otherwise it would be my own compilation of recipes (see below).

6. If you were a cookbook, which cookbook would you be?

That's easy since I have started to collect my favorite recipes into a binder so I can find them easily. I've very proud of it since it is really very-un-Kate-like to be so organized. If you look at the photo above, you'll see a white binder to the left of the row of books that says "Kate's Favorite Recipes". Two years ago I decide to consolidate the messy clippings file and towering stack of magazines into something more usable.
Here is a photo of the inside of my recipe binder: 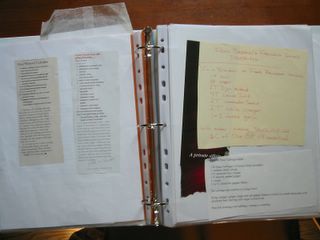 You probably can't read these recipes which may be driving you crazy.

I use page protectors to keep the recipes in, and anything from handwritten scraps of paper to newspaper and magazine clippings to print-outs from the web go in it. (The page protectors are also good at protecting the recipe from the frequent blobs of butter and oil that fly their way.) When I'm stretched for time and not feeling up to facing a new recipe that might not work I turn to the binder. I won't put a recipe in there if I haven't tried it and liked it and thought it worth making again.
7. If your cookbook we're extremely valuable, so valuable you might hide it with other valuables, where would that place be?
I don't hide any of my valuables. I don't think I have a particularly theft-worthy house and the things I think are valuable (my CD collection, the All-Clad pots and Henckels knives) are in plain view and probably not on any thief's wish-list.

I love peeking at people's bookshelves! I noticed you have all three Silver Palate cookbooks; the first two (not New Basics) are languising on my cookbook shelf. Are there any recipes I should know about in there?

I love the first Silver Palate cookbook, partly because the authors have no shame about telling you to dump a pint of cream into just about anything. It depresses me to no end that Shelia Lukins has since become a low-fat cook. Good recipes from this book include:
Eggplant peasant caviar (p 166)
Chicken Marabella (p. 86)(great for big parties)
Fruit-Stuffed loin of pork (p. 105)
Lentil Walnut salad (p. 160)
also, most of their soups and salad dressings are terrific.

I don't use the Good Times cookbook much; I just like reading it for ideas.

Hmmm...I'm having a party on Saturday (the baby will be one!). Maybe I'll be making some Chicken Marbella; thanks for the suggestion!

I think the new basics book is really just sort of a "best of" of the other two in a way. I'm pretty sure there are repeat recipes in it.

The reason I keep The New Basics around is that it contains the recipe for the infamous Lamb Football (my name, not theirs) that I make every New Year's Eve. They more tactfully call it Lamb Stuffed with Spinach and Chevre. I don't know if I've made anything else from the book though, now that you mention it...

Ah, another Mark Bittman fan! I don't have his book yet, but I enjoy his columns on the New York Times site. His recent foray into frozen vegetables gave me the stir-fried green bean recipe (to which I've added carmelized onions & garlic) that has become a favorite in these parts.