We had another feast at my book group last night that far surpassed any Thanksgiving meal (though I say that for those of you who actually look forward to Thanksgiving. I dislike traditional Thanksgiving foods, but that's a subject for a post next November).

I got so wrapped up in eating I forgot to photograph the main dishes until they were gone. I'll have to do a little word poetry to capture the flavors: Before dinner, there were spiced nuts and some hummus topped with olive oil and some incredible cumin that Halla's dad brings back for her from Egypt. The chicken/rice/apricot dish was mild, delicate, floral. The cucumber salad was a bracing counterpoint with mint and lemon. The spinach yogurt side dish was tangy and creamy and gave some welcome weight to set off the lightness of the other two dishes. Also some good bread and really good red wine to go with it all. We didn't have quite as many courses this time because only six of us could make it, but we'd probably feel really ill from over-eating if everyone had come (though of course we missed them in the discussion phase).

Someone reminded me to get out my camera at desert time. I know that cream puffs aren't a traditional Persian dish, but the author mentioned them in every other chapter so I get the feeling that they are a popular pastry in Tehran. I baked the choux pastry puffs earlier in the day, the chocolate sauce and vanilla whipped cream were made just before leaving and then I assembled them with the strawberries right before we ate them so they didn't get soggy. I made enough for 10 women, and as there were only 6 of us, well, we all had as many as we wanted and there were still some left over to reward the various husbands for putting the kids to bed single handedly. 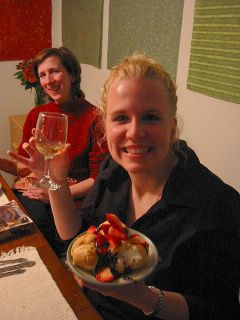 Jen looks very happy to have wine in one hand and
cream puffs in another. (That's Meg in the background.)


I was a little disappointed that the chocolate sauce separated a bit when re-warmed, but it still tasted good. The cream was organic and fabulous--I haven't seen such yellow cream since the days I used to spend on my Great Aunty Peggy's dairy farm in Devonshire. This is what my puffs looked like once I started eating them: 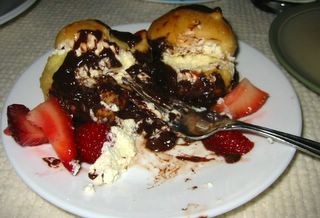 One down, three more to go...
Now we are trying to decide what to read next. A few possibilities are Peter Ho Davies and Carol Shields, neither of whose fiction I've read. I'm drawn towards Davies since he lives in Burns Park and I like to read local authors; I also like the title of one of his books though I have no idea what it is about--wouldn't you want to pick up a book called The Ugliest House in the World? We'll be emailing around in the next few days to poll those who weren't able to attend.

I know there are other books out there that have come out in paperback that I've been meaning to read, but right now their names are not popping up. I'd like to get a little off the book-group-track (you know what I mean, the books that it seems like every book group is reading: The Kite Runner, Reading Lolita in Tehran, The Curious Incident of the Dog in the Nighttime, The Red Tent) because some of the most interesting discussions we've had have been about less well-known fiction: The Colony of Unrequited Dreams, a novel about Newfoundland, is one that comes to mind. A Good Scent from a Strange Mountain, beautiful short stories about Vietnamese immigrants in the American South, is another. If you can think of a novel or short story collection that is terrific and not yet publicized up the yin yang, let me know.
Posted by Kate at 8:38 PM