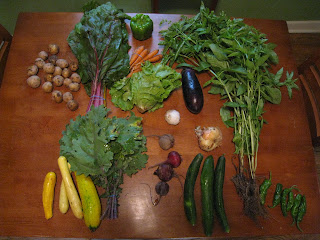 Ugh, we got okra this week. Thanks for the gratin recipe, I'll try it with our yellow squash.

Hey Melanie--I have a recipe for a good Indian okra and potato dish. I haven't made it in a while since I don't get okra often) but I remember thinking it was really tasty and not slimy at all. Let me know if you'd like the recipe!

As soon as I saw "eggplant" on the board, I thought. "Pasta all Norma!"

And that's exactly what I made for dinner last night. Mmmmm.