I've been brushing up an old skill lately--namely contorting my body into the physical position that allows me to knit and read at the same time. The first few times I tried recently to revive this skill my right hand fell asleep. Then I encountered a new challenge as the 55 lb dog climbed in my lap (she's a heat seeking missile) and complicated things. I had to try and prop the book on her head and not poke her with a needle. But I finally got the hang of it and so was able to finish a sweater and read a really good YA novel. And the dog got a lot of loving.

You'd think that my knitting would have picked up because of the lovely new yarn shop that opened in town (and where I occasionally work). Spun has beautiful yarns and is an inspiring place to spend some time and satisfy the fiber cravings. But Fiona requested that I knit her this sweater in mid-November and Spun didn't open until December 1st. 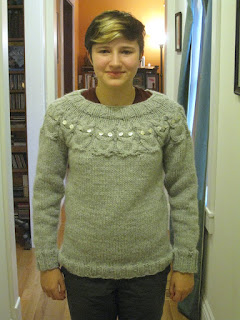 The significance of her asking me to knit for her cannot be understated since she has pretty much refused my offers of knitwear for the past few years (though she will occasionally still wear the fish hats that I made.) I didn't want her to change her mind so I rushed out and bought yarn at the big box craft store and cranked this baby out in washable acrylic/wool mix. (If I'd been a bit more patient and waited for Spun to open, I probably would have still bought an acrylic mix--like the affordable and soft Berroco Comfort Chunky that Spun carries--because my kids are crap at taking care of their clothes and I fully expect to find this sweater crushed in a corner under Fiona's bed...no premium fibers for them until they learn that a sweater is not a dust rag.) The pattern was easy and speedy and fun to knit. There are only two tiny seams to sew up at the end, but there are 36 (damn) buttons to sew on for the owl's eyes.

And the book I read while knitting the end of the sweater is this one: 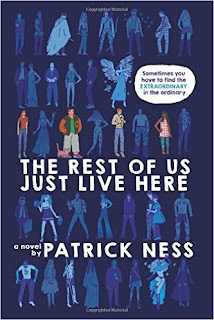 I loved Patrick Ness's previous books, particularly The Knife of Never Letting Go, and loved this one, too. The Rest of Us Just Live Here has a clever concept that, with a different author, could have been irritating. The beginning of each chapter has a brief summary of a parallel tale--one that will be familiar to YA readers (particular fun is poked at Twilight with numerous references to vampires, but the same could be said for Harry Potter.) Pretty much any novel that has a "chosen one" aspect and some form of paranormal activity is referenced in these brief bursts. Then the rest of the chapter shifts to four (mostly) normal kids and what it is like to witness weird stuff happening but be more focused on real world problems like family dynamics, crushes, what comes after high school and particular mental challenges. The main character, Mikey, suffers from OCD and his struggles with it make for some really poignant writing which Ness manages to make more interesting that the weird blue light and enchanted deer that keep appearing in the background and that are the problems of the chosen ones (not our main characters.) The satire never dominates but is gentle and appreciative and eventually does end up intertwining with the paths of the four main characters. It was a really lovely read and one which I couldn't predict what would happen which was a welcome change from a lot of the recent YA fiction I've read.

And now I need to go do some yoga stretches to straighten out my posture before contorting again for the next yarn/book project!

What a GREAT sweater, the owls are the best! plus a wonderful little read.
Thanks for the book recommendation I always need a book to read.
Wishing you happy Owlidays & all the best in the new year.
Genia