Time for a little looking back at my obsessions in 2008 before launching into 2009.

Books
In the books-intended-for- grown-ups department:
1. My favorite book of the year is one that I just finished last week: Pretty Monsters by Kelly Link. I give this book credit for keeping me in a good mood while the kids were out of school. (Well, at least in a better mood than I would have been without the book...can't be cheerful all the damn time.) Link's stories are strange and ominous and surreal. But this collection also had a touch of whimsy and optimism that I don't remember in her other collections, and which I appreciated very much. I loved "The Wizards of Perfil," "The Surfer," and "The Constable of Abal," particularly the last story which has permeated my dreams. Even better was the fact that each story began with a drawing by the immensely talented Shaun Tan (I love his book The Arrival). Putting Tan and Link together is a perfect match and I commend whatever editor or publisher had the vision. I have the book sitting here, ready to go back to the library, but I really don't want to let it go. I don't feel that kind of greediness very often.

2. Runner up: Monsters of Templeton (yes, another book with Monsters in the title...)

In the intended-for-children department:
The revelation of the year was the audio version of Tale of Desperaux. I'd read the book before, and enjoyed it, but the audio version is a whole different level of wonderful. It has become a part of our family lingo with lines like "Whoopsie" and "Cripes" resonating through our speech on a daily basis. In fact, we even named our new car "Whoopsie" (an explanation of the name will be in an upcoming post). And you couldn't pay me to go to the movie--every clip I've seen has rendered the story "cute" which is the opposite of the book.

Crafting
I didn't make a whole lot of progress on the knitting front in 2008, just a baby sweater and a lacy scarf. That's not too impressive. It does look like I will finish the Urban Aran before it is 90 degrees out though. So my two favorite crafting things from the past year were sewing related which is a bit of a surprise since I'm not a natural with a needle.

1. My most satisfying project were these super simple little bags which I use to hold my MP3 player and digital camera: 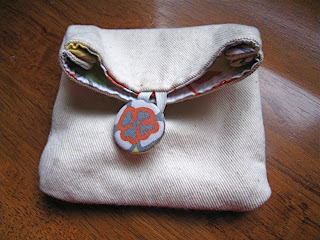 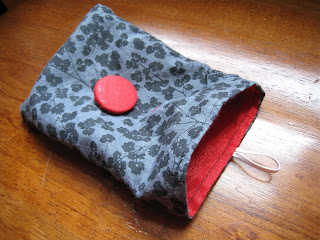 I made the first one following (loosely) the plans in Bend-the-Rules Sewing, and made the second one even more basic with fewer seams (and it is just as functional for something this small). They keep the crap off my electronics when they are bumping around in my purse next to my wallet and the bag of dried apricots I always carry for blood-sugar-level crises.

2. Runner up was pimping the dragon which made me feel like a competent parent for a change.

Recipes/Food
1. The recipe that I tried for the first time in the past year and will probably make more often than any other in the coming year is tahini lemon sauce. I have pretty consistently kept a container of this in the fridge at all times and it has provided countless "relief" meals when I haven't had a clue what to make for dinner. I dig through the fridge, find the tahini lemon sauce and then am able to improvise something pretty tasty and low effort: dollop it on roasted vegetables, toss it with some sauteed chicken, thin it with a little extra lemon and water and use as a salad dressing. Really useful stuff to have around.

2. Runner up: lamb/yogurt pasta stuff. This isn't the easiest recipe, nor the most challenging, but it has a flavor profile that I seem to crave often.

In the food someone-else-cooked-for-me department:
1. I am so happy to have a friend who makes the effort and invites us over to consume his wonderful smork.
2. Runner up: the three Lady Food Blogger events I've been to have made me feel nourished by my community (and by the terrific and widely varied cooking passions of the members).

Writing
1. My longhand editing project was my favorite writing experience of the year. It was particularly comforting to me since I had a year of rocky computer experiences (at this time, my computer is the only one in the house that is working so while the computer gods still are not smiling on our house, at least they've decided to spread the pain around among our family members.)

2. I don't really have a runner up in this obsession, except for the fact that I'm still having fun writing my novel.

Great blog Kate, I just added you to my MI blogroll :) I also am an avid reader and very into music, but I had to focus my blog on one interest (food) so as not to feel like it was totally out of control! I applaud your ability to multitask.

it is great to look back and find the great things that happened last year. I think maybe more of this should happen! I enjoyed this post very much/